Activity: the aim of this quiz is to introduce youngsters to the European Youth Monitor and the main statistics and trends on young Europeans. This tool is for young people 13+ and it is recommended for use in Youth exchanges, Training and networking, with minimum 2 participants. The tool was created and tested by A.R.S. for Progress of People in the context of YouthMetre project.

Instructions: the YouthMetre game takes inspiration from the traditional “Snakes and ladders” game. The game can be played by one or multiple teams: the trainer decides at the beginning of the game if dividing the participants into teams (Recommendation: with four participants or more it is recommended to split the players into different teams in competition with one another. Playing in teams is also definitely funnier!)

Each team throws the dice: the team getting the highest score gains the right to start the game. The team starting the game throws the dice one again and moves the pawn on the board accordingly (e.g. if the dice shows six the pawn moves through six squares).

Each question will contain three possible answers: the team will choose one of the answers. If the answer selected is the right one the team gains the right to throw the dice once again. In this case the pawn will move once again but no further question will be posed. If the answer selected is wrong: the right to throw the dice will be passed to the next team. If after a dice is thrown the pawn lands on a box with the base of a blue or a red arrow: it will move towards the box with the top of the blue or the bottom of the red arrow (e.g. from square 2 to square 10 (blue) OR from square 7 to square 4 (red)).

End of the game: the game ends when one of the teams reaches square n.36 and answers the last question on “Participation” correctly. Alternatively at the beginning of the game the trainer can set the number of dice throws after which the game ends. The same indicator varies in different EU countries AND / OR investigates the relation between that specific statistic and indicators on other Key Areas. 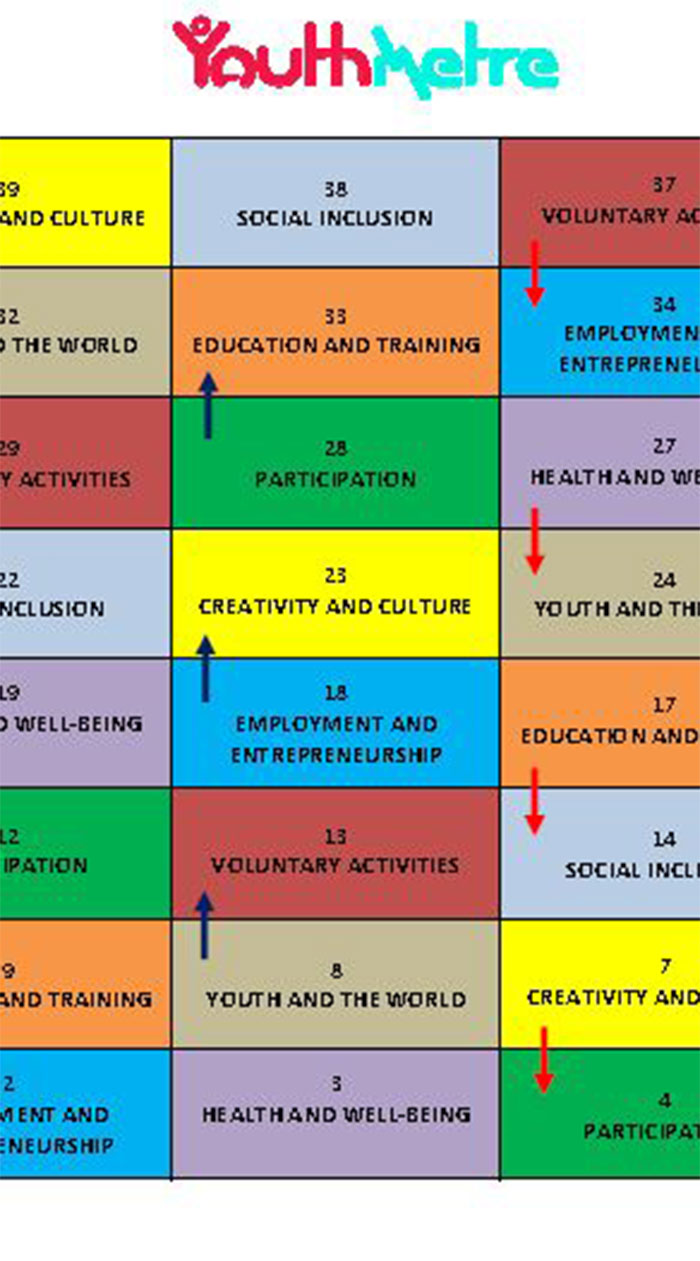 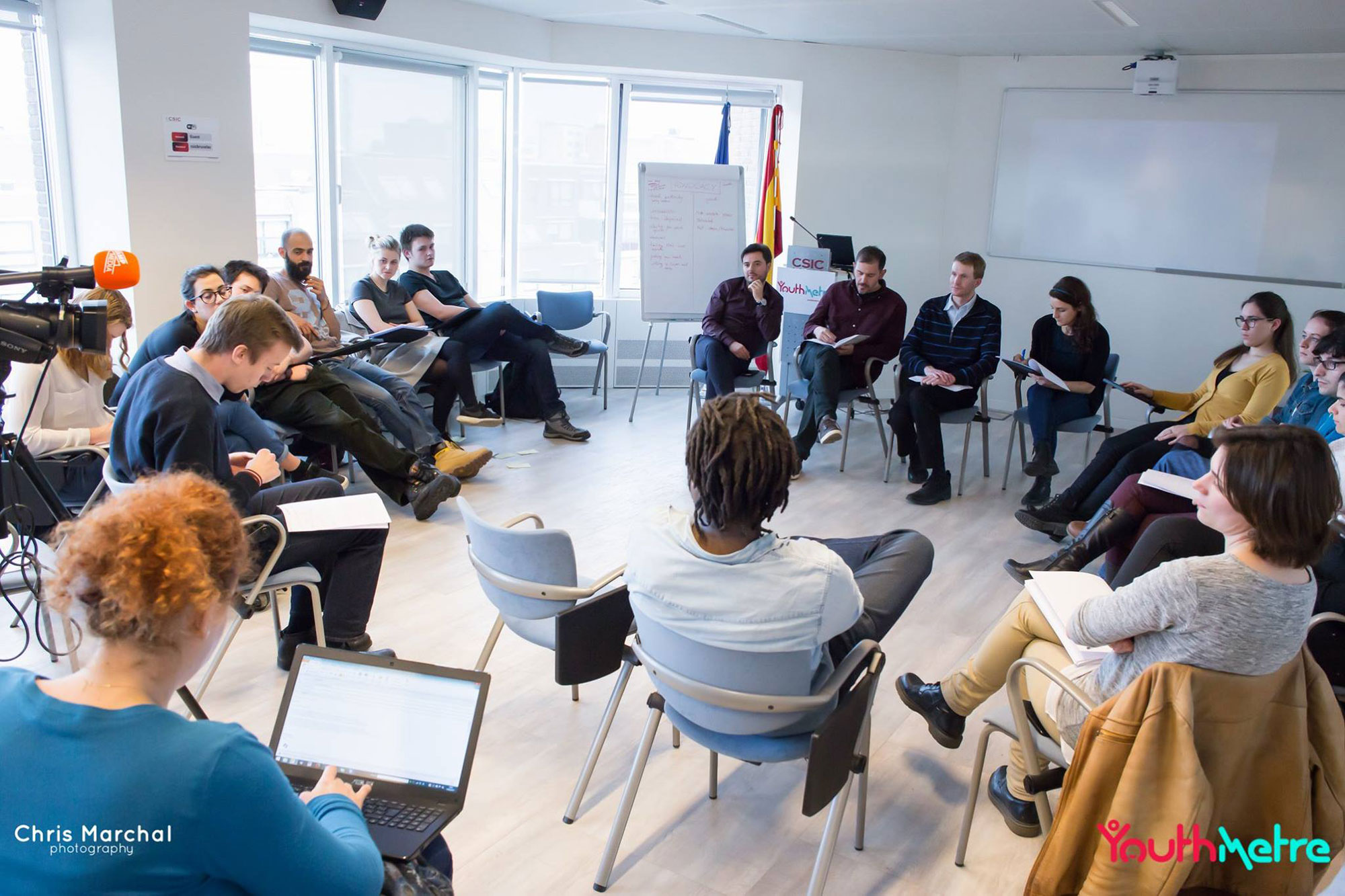 Expected outcomes: the YouthMetre game on indicators uses non formal education techniques to introduce topics – such as the indicators used to measure youth well-being – that may somehow be perceived as tough or unfriendly.

By playing the game, young people are confronted with the criteria adopted by the European Commission to measure youth well-being, its division in eight Key Areas, and/or with curious statistics concerning the youth situation. A set of five questions with three-options answers is provided for each of the eight Key Areas. The game aims at encouraging players to explore the EU Youth Monitor through YouthMetre.

Recommendation #1: it is recommended to set a maximum number of throws since otherwise the game might last too long. The number of dice throws depends on the amount of time available: however a number between 3 and 5 five is recommended).
Recommendation #2: the set of questions for the YM game can be further enlarged or adapted according to the age and knowledge of the participants. It is recommended that the trainer checks the questions before the training starts and adapts them to the ability / age of the participants. Further questions can be added by checking the statistics available on the EU Youth Monitor

Tips for facilitation: after each answer coming from the participants the trainer might discuss with the team the reason why they decided on that specific answer. 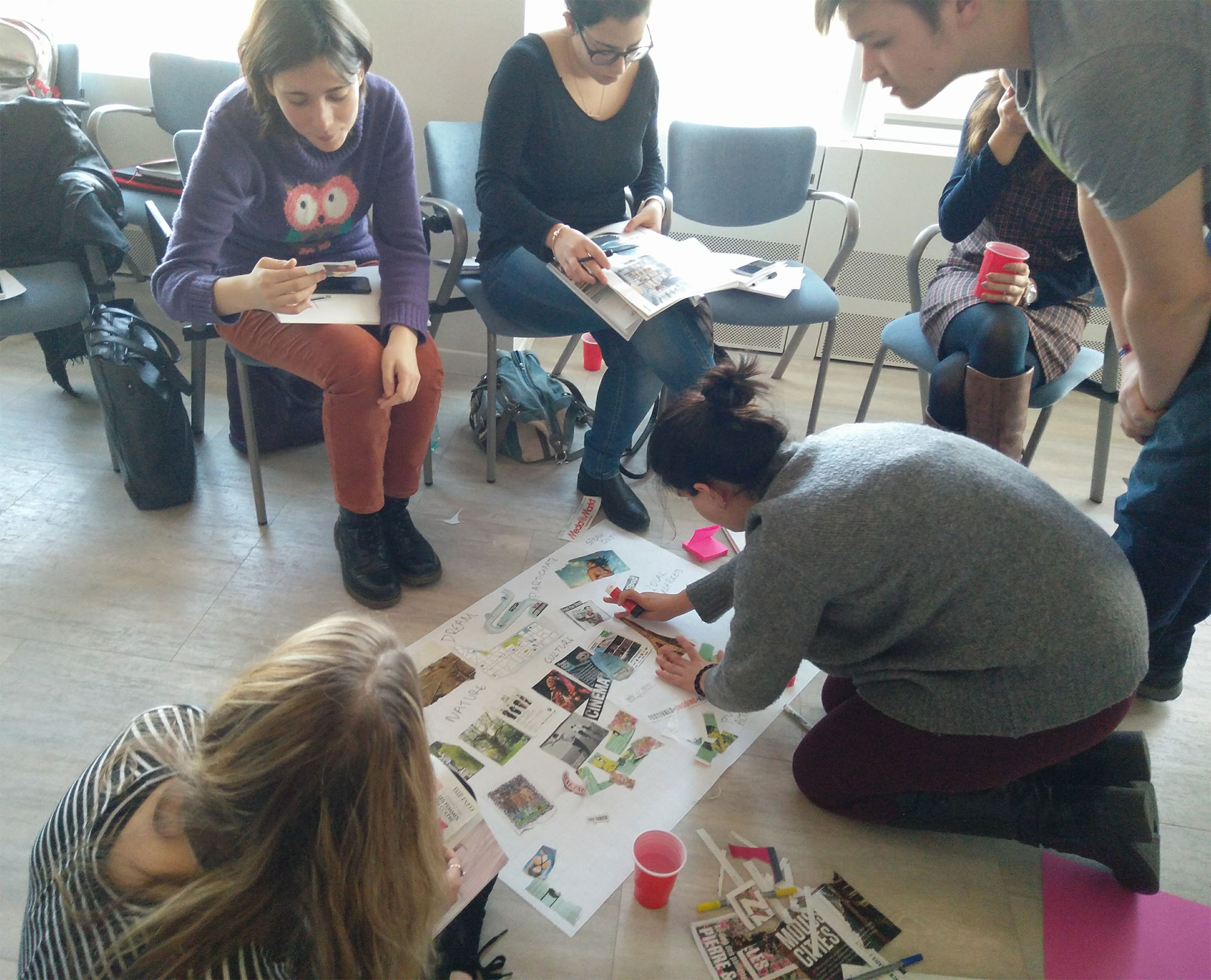