Brain drain, imbalance in the youth labour market, and ancient, crumbling buildings that remind younger generations of the war. Carpe Diem introduce us to the city and unrecognised youth work of Karlovac, Croatia.

When we get to Karlovac there is no one welcoming us. The rain is pouring, and the indications on our “home made” map are quite misleading, so that we spend 45 minutes to find our hostel.

After leaving our stuff and changing our wet clothes, we are set to go out. The hostel’s owner, a nice Irishman who left everything to open a cozy accomodation in the center of Karlovac, recommends us to go to Konoba Kostanjac. We follow his suggestion, and five minutes after footing in the restaurant, we get to love this solution. Large tables, noise, laughter and an old fashioned atmosphere reminding us of our “Italian osterie”. Food is delicious, and eventually we exchange a lovely chat (in a weird language mixing up Italian, English and Croatian) with a group of old retired friends. When we get out of the local, we finally meet the two leaders of the association Carpe Diem, Aleksandra and Marko.

An art professor who seized the day

Aleksandra and Marko’s company is very pleasant, and we would like to talk with them for hours. We remain especially fascinated by Alex’ story. Art Professor, that in a country such as Croatia means lifelong certainty, she decided to give up her job to take up non-formal education. The satisfactions she can find in this work, without limits of strict programs to follow and with greater room for creativity, is huge. The only matter is that the role of youth workers is still poorly recognised. We understand her so well.

Karlovac’s buildings remind you of the war

The next day we reach Carpe Diem’s headquarters thanks to Filip’s guide. The venue is beautiful, adorned with amazing photos taken from a previous photo contest. Everyone, although it is Saturday morning, arrives on time. We get started.

The debate is intense and it often looks back on Karlovac’s past. Even though the guys have not experienced the war or were too young to remember it, they feel the city never rebounded completely. For example the ancient buildings (in particular the walls) have never been entirely reconstructed, and until now they stand in terrible conditions.

Ana Marija tells us that, along with a group of youngsters, she repeatedly submitted to local authorities some proposals aimed at restoring and requalifying the old buildings. Unfortunately, lack of funds (and maybe of interest) ended their ideas in a stalemate. 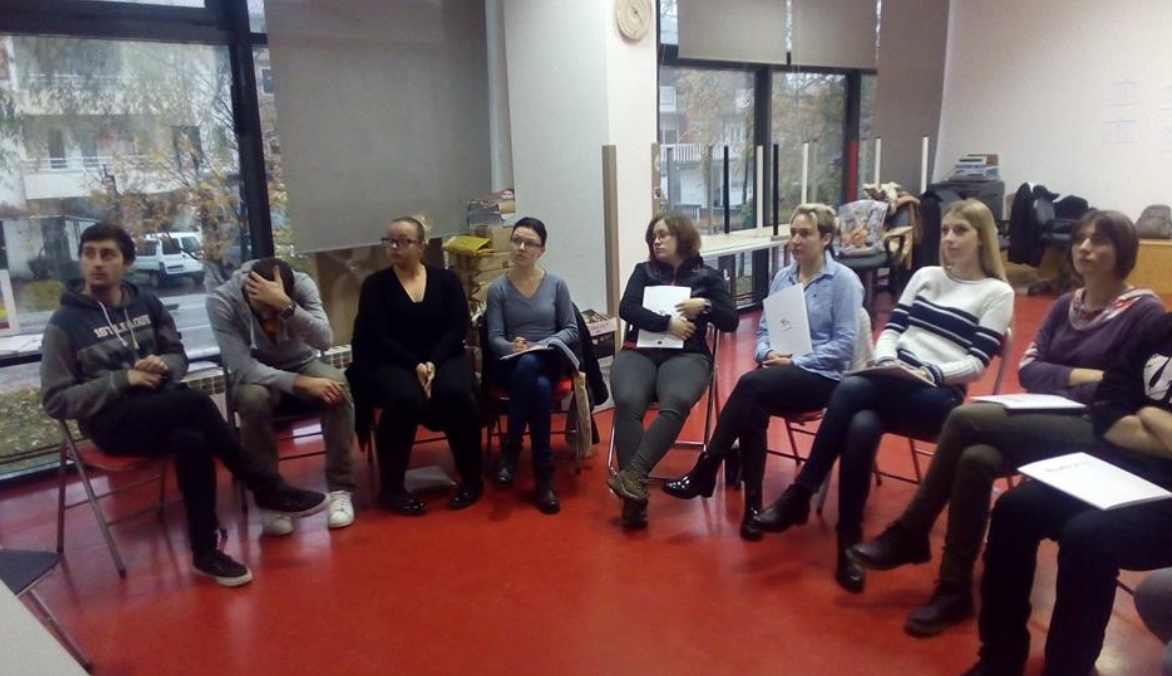 No students return to Karlovac

We move on to the economic and employment situation of youngsters in Karlovac. The participants claim that going to Zagreb or Rijeka is the only possibility to continue the studies after school. It’s unlikely that anyone who goes to study abroad comes back to Karlovac, since the major economic activities are the arms industry (with one of the largest production sites of guns in the European Union) and energy production. There is no economic diversification, and employers usually prefer to take on young students through cheaper student contracts, creating dangerous imbalance in the youth labour market at the expense of quality. Because of this, the higher qualified youngsters prefer to leave Karlovac, and Croatia in general.

The brain drain is another alarming phenomenon that is affecting the entire country. After the short boom of the early 2000’s, the economic situation began to stagnate, crippled by a long and unsuccessful privatisation process of the former State-owned enterprises.

Fortunately, the desire of participation has not stopped, and an increasing number of youth are still embarking on volunteering. The problem is the lack of recognition of their activities.  As Luca says, “as volunteers we don’t receive any official certifications, and we cannot add any new skill or acquired competence in our curricula.”

After five really interactive hours we manage to close the group. We greet all the participants and the youth workers, extremely grateful for their participation. We go out under the non-stop rain, ready to leave for Zagreb.

Doviđenja Karlovac! We know that ours is just a goodbye until the good season.